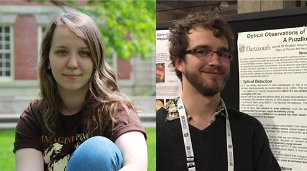 Lena Komarova is a rising junior at Smith College This summer, she will work on ram pressure stripping of star-forming regions in the Virgo cluster galaxies. Lena has worked on the project Modelling Scalar Fields in Inflationary Models of the Early Universe and has served as a learning and teaching assistant for introductory physics and astronomy classes. She is active in the Smith College Physics Club and Smith College Russian Club and enjoys reading Russian literature. Taking an astronomy class during her first year of college out of curiosity, Lena was fascinated by the material and decided to major in it. For her, astronomy symbolizes the centuries of humanity’s work to understand the universe and find its place in it. She is looking forward to work with astronomical data, a change in pace from the research in theoretical physics that she has been doing. She is excited to experience Yale’s libraries.

Jack Neustadt is a 2017 graduate of Dartmouth College. This summer, he will work with Professor Marla Geha on stellar-mass black holes. Jack has served as a research assistant to Dartmouth professor Robert Fesen since he was a freshman, mostly on the study of galactic and extragalactic supernova remnants. He has extensive experience observing from the MDM Observatory in Kitt Peak, Arizona. Also at Dartmouth, Jack has served as a peer tutor and is active in the Dartmouth Physics Society, Dartmouth Standup Comics, and Dartmouth Japan Society. As a high schooler, he took after-school astronomy classes at the American Museum of Natural History in hopes of getting into the museum’s biology program. However, astronomy piqued his interest and he has been stargazing ever since. Jack’s previous research on supernova remnants is quite different from this summer’s research on black holes, something he says is intimidating but exciting.