Ahoy! ‘Oumuamua may be a hydrogen iceberg 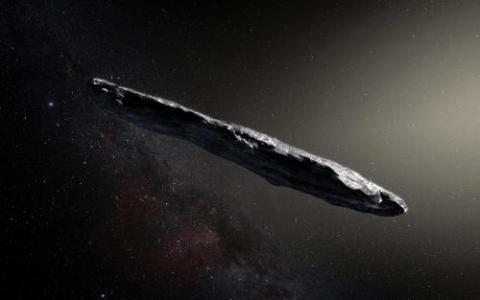 ‘Oumuamua, the first known interstellar object to pass through Earth’s solar system, has been called many things: a comet, an asteroid, a cigar-shaped spaceship.

Now it has a new description: Astronomers at Yale and the University of Chicago say it’s a hydrogen iceberg.

A study based on the researchers’ findings has been accepted by the Astrophysical Journal Letters and appears on the preprint website arXiv.

“We developed a theory that explains all of ‘Oumuamua’s weird properties,” said co-author Gregory Laughlin, a professor of astronomy in Yale’s Faculty of Arts and Sciences. “We show that it was likely composed of hydrogen ice. This is a new type of object, but it looks like there may be many more of them showing up, going forward.”

The study’s first author is Darryl Seligman, a former Yale graduate student now at the University of Chicago, who began the research at Yale.

Researchers at the University of Hawaii first discovered ‘Oumuamua in 2017, more than a month after it passed its closest point to the Sun. They named the object after the Hawaiian word for “scout.”

Read more of Jim Shelton’s YaleNews article by clicking the link below: