Astronomers find a massive black hole that outgrew its galaxy 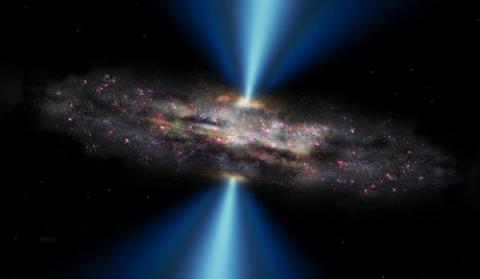 An international team of astronomers, including the research group of C. Megan Urry at Yale, have spotted a super-sized black hole in the early universe that grew much faster than its host galaxy.  The black hole, located in the normal-sized galaxy CID-947, is among the most massive black holes ever found, measuring nearly 7 billion solar masses.

The discovery runs counter to most observations about black holes. In most cases, black holes and their host galaxies expand at the same rate.  The team’s findings also challenge earlier suggestions that the radiation emitted by expanding black holes curtails the creation of stars, as stars were still forming in CID-947.

The group made the discovery during a project to map the growth of supermassive black holes across cosmic time.

“Our survey was designed to observe the average objects, not the exotic ones,” said Urry. “It was quite a shock to see such a ginormous black hole in such a deep field.”

The observations were made using the W.M. Keck Observatory in Hawaii and the Chandra COSMOS legacy survey.

Benny Trakhtenbrot, a researcher at ETH Zurich’s Institute for Astronomy, is the lead author of the paper in the journal Science.  Other co-authors of the paper include Francesca Civano, an associate research scientist at Yale; David Rosario, of the Max-Planck Institute; Martin Elvis, of Harvard; Kevin Schawinski, of ETH Zurich and a former Einstein Fellow at Yale; Hyewon Suh, of Harvard; Angela Bongiorno, of INAF-Osservatorio Astronomico di Roma; and Brooke Simmons, of Oxford and a former graduate student at Yale.