Astronomers uncover the brightest quasar in the early universe 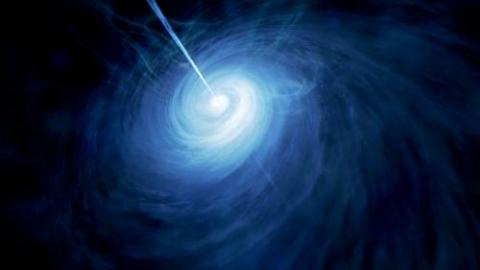 Researchers have discovered the brightest quasar yet known, detected from the period when the universe’s star-making hydrogen gas became ionized, known as “reionization.”

The international research team found the quasar’s exceptional brightness to be caused by gravitational lensing, a phenomenon by which the gravity of objects closer to Earth acts as a magnifying glass to observe objects much farther away in space.

Quasars are the bright cores found in some galaxies, powered by supermassive black holes. Their brightness is believed to come from the hot material that falls into the black hole.

“The detection of this peculiar source in the faraway universe is a major discovery for a surprising reason,” said Yale postdoctoral associate Fabio Pacucci, co-author of a study which will be published in The Astrophysical Journal Letters, as well as lead author of a follow-up paper on the theoretical implications of the discovery. “For decades we thought that lensed quasars should be very common in the faraway universe, but this is the first source of this kind that we have found.”

Pacucci and his colleagues said the super-bright quasar, catalogued as J043947.08+163415.7, could hold the record for being the brightest in the early universe for quite some time. It shines with light equivalent to 600 trillion suns and is located 12.8 billion light-years from Earth. As astronomers look farther into space in terms of distance, it allows them to look farther back in time, closer to the time of the Big Bang.

The discovery was announced Jan. 9 during a press conference at the 233rd meeting of the American Astronomical Society in Seattle. The lead investigator is Xiaohui Fan, Regents’ Professor of Astronomy at the University of Arizona’s Steward Observatory.

“This detection gives us a clue about how to find a population of ‘phantom quasars,’” Pacucci said. “These sources are difficult to detect, as our observations are misled by the presence of the lensing object, in-between the faraway quasar and the Earth. If they do exist, ‘phantom quasars’ could revolutionize our idea of the most ancient history of the universe.”

The researchers made use of multiple Hawaii-based observatories in their work, including Gemini Observatory, the James Clerk Maxwell Telescope, United Kingdom Infra-Red Telescope (UKIRT), the W.M. Keck Observatory, and the Panoramic Survey Telescope and Rapid Response System (Pan-STARRS1).