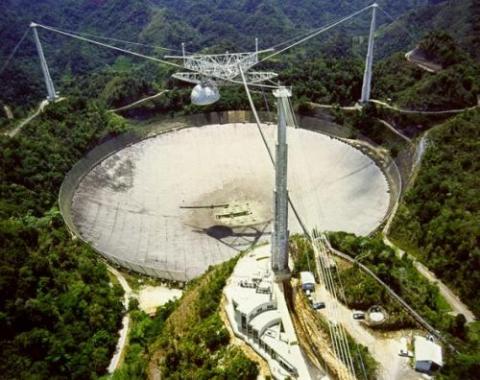 The iconic 305-meter radio telescope at Puerto Rico’s Arecibo Observatory collapsed one year ago this week.

“The telescope at Puerto Rico’s Arecibo Observatory was a scientific marvel, extensively expanding our understanding of the universe,” said Blumenthal. “Its collapse left a significant educational void for our country and the scientific community across the world. I’m proud to recognize its important contributions alongside my colleagues and express our strong support for further studies for how best to replace—and build upon—this telescope’s capabilities at the world-class Arecibo Observatory.”

“For decades, the telescope at the Arecibo Observatory provided us with new atmospheric insights, solar system information, and heightened imagination for the future of scientific discovery,” said Markey. “While its collapse last year left gaping holes in our research, I am proud to join Senator Blumenthal to introduce this resolution to encourage the National Science Foundation to find the best pathway forward in replacing the iconic telescope. We can restore Puerto Rico’s scientific prowess, while also preserving the historic and cultural significance of the Arecibo Observatory.”

“The Arecibo Observatory contributed to numerous scientific advances and served as a source of inspiration for so many people in Puerto Rico and beyond,” said Warren. “The collapse of its main telescope one year ago was a major loss, and we must explore ways to replace the telescope and recognize the historical and cultural significance of the Arecibo Observatory.”

Over its 57 years in operation, the Arecibo telescope significantly advanced STEM education and played a vital role within the scientific community. The Senate resolution recognizes the loss of this important scientific instrument for the research community and the important role it played in advancing the studies of space and atmospheric sciences, radar astronomy and planetary sciences, astronomy, and astrophysics. The resolution encourages the National Science Foundation (NSF), the current owner of the Arecibo Observatory, and the National Aeronautics and Space Administration (NASA) to work with other agencies to continue their studies to determine the most appropriate way to replace the scientific capabilities that were lost at the observatory, utilizing new state-of-the-art technologies at the site.

The full text of the Senate resolution can be found here. A similar resolution was introduced by U.S. Representative González-Colón (R-PR) in the House earlier this week.