Black hole has an appetite for cold, cosmic rain 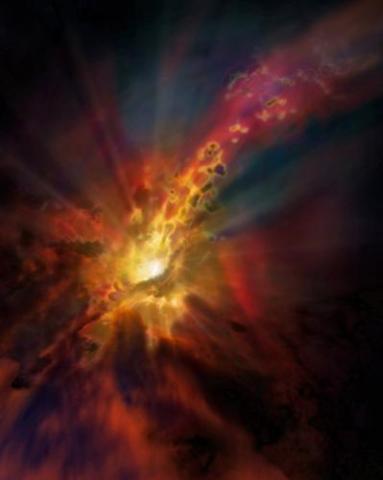 “Although it has been a major theoretical prediction in recent years, this is one of the first unambiguous pieces of observational evidence for a chaotic, cold ‘rain’ feeding a supermassive black hole,” said Yale astronomer Grant Tremblay, lead author of the study. “It’s exciting to think we might actually be observing this galaxy-spanning ‘rainstorm’ feeding a black hole whose mass is about 300 million times that of our Sun.”

The researchers said they plan to search for similar “rainstorms” in other galaxies to determine if such cosmic weather is a common phenomenon.

The international team also included Yale professors C. Megan Urry and Louise Edwards, as well as researchers from the Massachusetts Institute of Technology’s Kavli Institute for Astrophysics and Space Research, the Rochester Institute of Technology, Michigan State University, the Harvard-Smithsonian Center for Astrophysics, the Naval Research Laboratory Remote Sensing Division, the University of Michigan, the University of Rochester, and institutions in Germany, the Netherlands, France, Canada, the United Kingdom, and Mexico.

The study used data from the Atacama Large Millimeter/submillimeter Array (ALMA) telescope in Chile and is published in the Journal Nature.

This article has been adapted from a Yale University Press Release by Jim Shelton.