Cold quasars could rewrite our understanding of a galaxy’s lifecycle 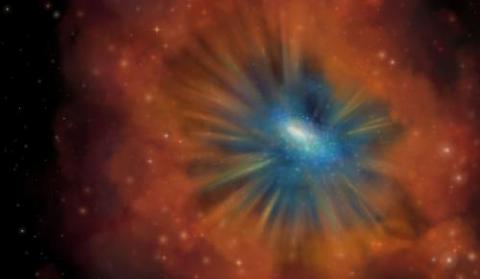 Astronomers have discovered a new class of “cold quasars” that could change our perception of how galaxies mature.

The discovery was announced June 12 at the annual meeting of the American Astronomical Society in St. Louis.

Cold quasars are galaxies that have an abundance of cold gas that is still able to produce new stars, despite having a quasar — a bright core powered by supermassive black holes — at its center. Gas falling toward a quasar at the center of a galaxy forms an accretion disk that can produce a large amount of electromagnetic energy and luminosity hundreds of times greater than a typical galaxy.

Typically, the formation of a quasar signals the end of a galaxy’s ability to produce new stars. But in the new research, about 10% of galaxies hosting accreting supermassive black holes still had a supply of cold gas and made new stars even during the so-called “retirement” phase.

“The quasars we have identified via their X-ray emission show a surprising amount of cold dust, more than was expected based on previous identification of quasars by their ultraviolet emission,” said co-author Meg Urry, the Israel Munson Professor of Physics and Astronomy and director of the Yale Center for Astronomy and Astrophysics (YCAA).

Read more of this article by Jim Shelton on Yale News…

Image Credit: A galaxy with a quasar at its center, surrounded by dust. (Illustration: Michelle Vigeant)