Dazzling dispatches from the heart of a galaxy 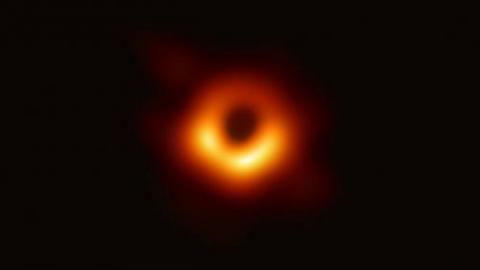 Mislav Baloković, a postdoctoral fellow at the Yale Center for Astronomy and Astrophysics, has a prime viewing spot for the most famous black hole humans have ever seen.

That would be the supermassive black hole in the galaxy M87, located 55 million light years from Earth.

Two years ago, the Event Horizon Telescope Collaboration (EHTC) — a global collaboration of astrophysicists and observatories that created a virtual, Earth-sized telescope, released an image of M87. It was the first photograph of a black hole and a technical achievement lauded by scientists around the world.

Balcković, who came to Yale last fall, is a member of EHTC. He is a core contributor and co-author of a study published April 14 in The Astrophysical Journal Letters that sheds new light on the cosmic environment surrounding M87’s black hole.

EHTC data will allow scientists to conduct new lines of investigation into some of the most challenging areas of astrophysics. For example, scientists will use the data to improve tests of Albert Einstein’s theory of general relativity. Currently, the main hurdles for these tests are uncertainties about the material rotating around a black hole and being blasted away from the black hole in jets that produce light spanning the entire electromagnetic spectrum, from radio waves to visible light to gamma rays.