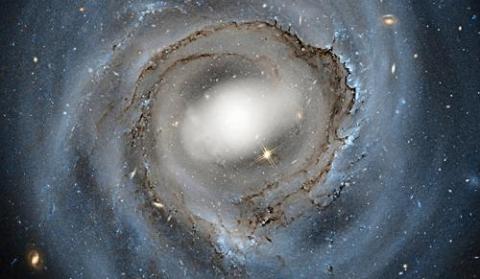 Kenney analyzed Hubble images of a spiral galaxy in the Coma cluster, located 300 million light years from Earth. It is the closest high-mass cluster to our solar system.

He looked at the way the cosmic wind, caused by the galaxy’s orbital motion through hot gas in the cluster, is eroding the gas and dust at the leading edge of a nearby galaxy.  Kenney found a series of intricate dust formations on the disk’s edge, as cosmic wind began to work its way through the galaxy.

“There are head-tail filaments protruding from the dust front,” Kenney explained. “We think these are caused by dense gas clouds becoming separated from lower density gas.”

“The evidence for this is that dust filaments in the HST (Hubble Space Telescope) image look like taffy being stretched out,” Kenney said. “We’re seeing this decoupling, clearly, for the first time.”

The removal of gas stops the creation of new stars and planets.  Although new stars are still being born in the “pillars” of dust and gas from the Coma galaxy, we are witnessing the last generation of stars that will form.

Kenney’s co-authors on the Astronomical Journal paper are Yale doctoral student Anne Abramson and Hector-Bravo Alfaro from the Universidad de Guanajuato in Mexico.

This article was adapted from the Yale University press release by Jim Shelton (URL below).