A fireball in space reveals the nature of novae 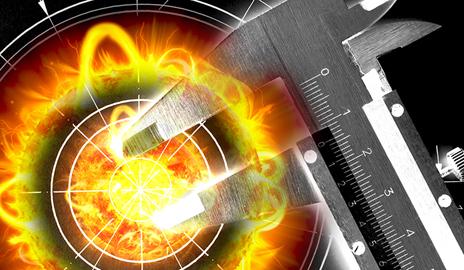 For the first time, scientists have measured the size and structure of a nova’s nuclear blast as it happened — thanks, in part, to a Yale University astronomer’s timely observations.

The discovery of Nova Delphini 2013, along with the data collected about it, could well sharpen or reshape our understanding of the nature of such blasts. The research appears online in the journal Nature.

Novae are found in solar systems with two closely orbiting stellar objects. The gravity from one star, a white dwarf, pulls in hydrogen from the atmosphere of another star, a red giant. This buildup of extra matter on the white dwarf’s surface eventually causes a nuclear detonation.

Tabetha Boyajian, a postdoctoral fellow in Yale’s Department of Astronomy and Astrophysics, had just arrived at California’s Mount Wilson Observatory when word came of a nova that exploded only hours earlier, on Aug. 14, 2013. Boyajian and other researchers quickly put aside their own projects, in order to devote full attention to the phenomenon.

“It’s an opportunity we’ve never had before to see how novae expand,” Boyajian said. “There are all sorts of theories and models of how this material detonates and the processes that follow. But being able to see it happening makes this super, super special.”

What they found was startling in its magnitude. After one day, the size of the nova fireball was equal to the radius of Earth’s orbit. After 43 days, it was the size of our solar system.

The blast expanded at a speed of 1.3 million miles per hour, the research team calculated. In addition, researchers measured the fireball’s brightness and shape.

“A nova has never been studied this way, in this detail,” said Kaspar von Braun, of the Max Planck Institute for Astronomy in Germany, another member of the team. “It all had to be done in express mode.” Almost on a nightly basis, von Braun said, astronomers reconfigured the six telescopes of the observatory’s CHARA Array to gather the necessary data.

The principal investigator for the study was Gail Schaefer, research scientist at the CHARA Array of Georgia State University.

Boyajian said the nova was impressive even without a telescope. “We went outside and we could see it with our eyes,” she said. “We were seeing a star that wasn’t there before. That was pretty awesome.”

At Yale, Boyajian is part of professor Debra Fischer’s team of exoplanet hunters. The team detects and characterizes planets located outside of our solar system.