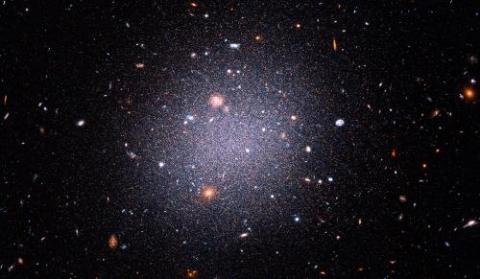 Three years ago, a team of astronomers led by Yale’s Pieter van Dokkum surprised the scientific community with the discovery of a far-off galaxy that contained little or no dark matter.

The discovery, made using NASA’s Hubble Space Telescope, had the potential to upend well-established theories about how galaxies form and evolve. That is because dark matter — the invisible scaffolding that accounts for most of the universe’s mass — is considered essential for creating and shaping galaxies.

But how could a galaxy exist with almost no dark matter? Some astronomers speculated the finding was incorrect. Specifically, they questioned the accuracy of distance measurements from Earth to NGC 1052-DF2 — the galaxy with no dark matter.

Now, in a new study published in The Astrophysical Journal Letters, van Dokkum and Yale graduate student Zili Shen have pinpointed the distance to DF2 and confirmed the earlier finding.

“We went out on a limb with our initial Hubble observations of this galaxy in 2018,” said van Dokkum, Yale’s Sol Goldman Family Professor of Astronomy. “I think people were right to question it because it’s such an unusual result. It would be nice if there were a simple explanation, like a wrong distance. But I think it’s more fun and more interesting if it actually is a weird galaxy.”

Knowing the distance to DF2 is crucial to determining its dark matter content. The calculation of total mass is based on the motions of the stars within the galaxy; their velocities are influenced by the pull of gravity. The researchers found that the observed stellar mass, which depends on distance, matches the galaxy’s overall mass, with minimal room left for dark matter.

However, if DF2 were closer to Earth, as some astronomers claim, it would be intrinsically fainter and less massive. The galaxy, therefore, would have more dark matter to account for the observed effects of the total mass.

Read the full article by Jim Shelton on Yale News: