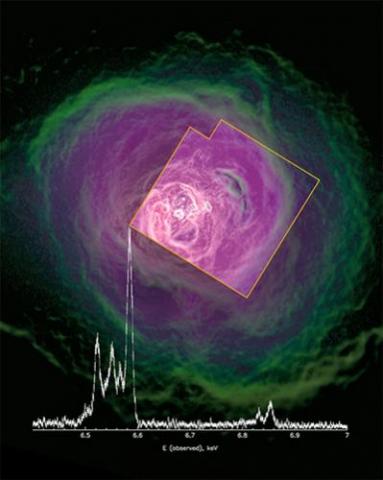 In its brief time gathering data this year, the Hitomi X-ray Observatory discovered something quite serene: the calm core in a massive cluster of galaxies.

Scientists from the international Hitomi mission report July 6 in the journal Nature that a “remarkably quiescent atmosphere” exists at the heart of the Perseus cluster, located in the constellation Perseus. The new information, obtained with an innovative Soft X-ray Spectrometer (SXS), gives astronomers fresh insight into the dynamics of the hot, flowing gas that pervades galaxy clusters and other important astrophysical phenomena.

Yale played a prominent role in the project. Andrew Szymkowiak, a Yale senior research scientist in astronomy and physics, was a key member of the SXS development team over the past 30 years. Meg Urry, Yale’s Israel Munson Professor of Physics and Astronomy; Paolo Coppi, professor of astronomy and physics; and Szymkowiak are co-authors of the new study. The principal investigator is Tadayuki Takahashi of the Japanese Aerospace Exploration Agency (JAXA) and the University of Tokyo.