Looking for pieces of Venus? Try the moon 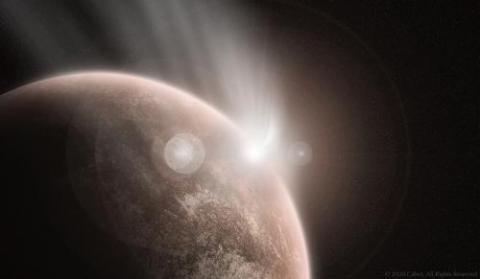 A growing body of research suggests the planet Venus may have had an Earth-like environment billions of years ago, with water and a thin atmosphere.

Yet testing such theories is difficult without geological samples to examine. The solution, according to Yale astronomers Samuel Cabot and Gregory Laughlin, may be closer than anyone realized.

Cabot and Laughlin say pieces of Venus — perhaps billions of them — are likely to have crashed on the moon. A new study explaining the theory has been accepted by the Planetary Science Journal.

The researchers said asteroids and comets slamming into Venus may have dislodged as many as 10 billion rocks and sent them into an orbit that intersected with Earth and Earth’s moon. “Some of these rocks will eventually land on the moon as Venusian meteorites,” said Cabot, a Yale graduate student and lead author of the study.

Cabot said catastrophic impacts such as these only happen every hundred million years or so — and occurred more frequently billions of years ago.

“The moon offers safe keeping for these ancient rocks,” Cabot said. “Anything from Venus that landed on Earth is probably buried very deep, due to geological activity. These rocks would be much better preserved on the moon.”