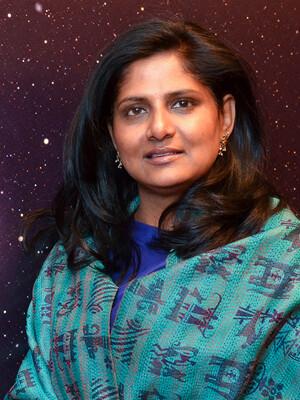 Priyamvada Natarajan, a theoretical astrophysicist who maps the unseen universe — invisible entities like dark matter, black holes, and dark energy — whose presence can only be indirectly inferred from observational data, has been appointed the inaugural Joseph S. and Sophia S. Fruton Professor of Astronomy and Professor of Physics, effective immediately.

She is a member of the Faculty of Arts and Sciences in the departments of Astronomy and Physics and is the current chair of the Department of Astronomy.

A Yale faculty member since 2000, Natarajan has made seminal contributions to our understanding of the coupling of the visible and dark universe: the formation, fueling, feedback and assembly history of supermassive black holes in their larger scale cosmic context and mapping dark matter substructure in clusters of galaxies. Her research has focused on confronting and testing theoretical ideas with observational data in astrophysics. She has made significant contributions to two key open problems in astrophysics — to the studies of dark matter using gravitational lensing and to our current understanding of the formation, fueling and growth of black holes over cosmic time. An internationally acknowledged intellectual leader, her papers have spawned and continue to generate and open up fertile research sub-fields at the current frontier in astrophysics.

Her research and original contributions to astrophysics have been recognized with many awards and honors, including the Liberty Science Center (LSC) Genius Award, the Emeline Conland Bigelow Fellowship at the Radcliffe Institute for Advanced Study at Harvard University, a Guggenheim Fellowship, the India Abroad Foundation’s “Face of the Future” Award, an India Empire NRI award for Achievement in the Sciences and the award for academic achievement from the Global Organization for the People of Indian Origin (GOPIO). She is an elected fellow of the Royal Astronomical Society, the American Physical Society, and the Explorers Club. In addition to her faculty position at Yale, Natarajan holds the Sophie and Tycho Brahe Professorship at the Niels Bohr Institute of the University of Copenhagen, Denmark, and an honorary professorship for life at the University of Delhi, India. She is an external principal investigator at the Black Hole Initiative at Harvard University and an associate member of the Center for Computational Astrophysics at the Flatiron Institute in New York.