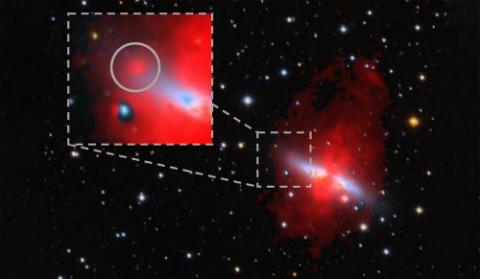 The Dragonfly telescope is undergoing a metamorphosis.

For the past decade, the Dragonfly Telephoto Array — designed by Yale’s Pieter van Dokkum and the University of Toronto’s Roberto Abraham and located in New Mexico — has conducted groundbreaking science by detecting faint starlight within dimly lit parts of the night sky. The telescope uses clusters of telephoto lenses to create images, much the way a dragonfly’s eyes gather visual data.

The telescope has spotted previously unseen “fluffy” galaxies, diffuse dwarf galaxies, and galaxies with little or no dark matter.

Now Dragonfly is setting its sights on extragalactic gas.

With the help of a special filter mounted in front of each lens, the Dragonfly telescope is able to block most of the light emitted by stars — leaving just the faint glow of light-emitting, ionized gas. The Dragonfly team built a “pathfinder” version of the new telescope, with three lenses instead of the original Dragonfly’s 48 lenses, as a proof-of-concept device.

To read the full article by Jim Shelton, visit the YaleNews link below: