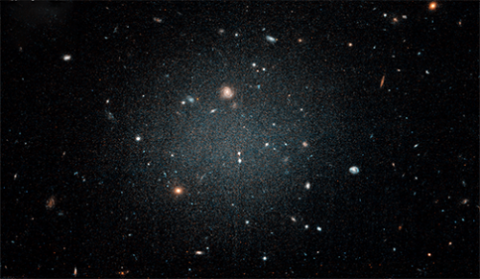 A Yale-led team of researchers is doubling down on its earlier finding of a galaxy with almost no dark matter.

In 2018, the researchers published their original study about galaxy NGC 1052-DF2 — DF2 for short — the first known galaxy to contain little or no dark matter. The finding was highly significant because it showed that dark matter is not always associated with traditional matter on a galactic scale. It also ruled out several theories that said dark matter is not a substance but a manifestation of the laws of gravity on a cosmic scale.

Invisible dark matter typically dominates the makeup of galaxies. Finding an object without dark matter was unprecedented and led to a good deal of debate within the scientific community.

“If there’s one object, you always have a little voice in the back of your mind saying, ‘but what if you’re wrong?’” said team leader Pieter van Dokkum, the Sol Goldman Family Professor of Astronomy at Yale. “Even though we did all the checks we could think of, we were worried that nature had thrown us for a loop and had conspired to make something look really special whereas it was really something more mundane.”

“The fact that we’re seeing something that’s just completely new is what’s so fascinating,” said Yale graduate student Shany Danieli, who first spotted the galaxy about two years ago. “No one knew that such galaxies existed, and the best thing in the world for an astronomy student is to discover an object, whether it’s a planet, a star, or a galaxy, that no one knew about or even thought about.”

Danieli is the lead author of one of the new studies. It confirms the team’s initial observations of DF2, using more precise measurements from the W.M. Keck Observatory’s Keck Cosmic Web Imager. The researchers found that the stars inside the galaxy are moving at a speed consistent with the mass of the galaxy’s normal matter. If there were dark matter in DF2, the stars would be moving much faster.

Van Dokkum is lead author of the other new study, which details the discovery of a second galaxy devoid of dark matter. That galaxy is named DF4.

“Discovering a second galaxy with very little to no dark matter is just as exciting as the initial discovery of DF2,” van Dokkum said. “This means the chances of finding more of these galaxies are now higher than we previously thought. Since we have no good ideas for how these galaxies are formed, I hope these discoveries will encourage more scientists to work on this puzzle.”

Both DF2 and DF4 are part of a relatively new class of galaxies called ultra-diffuse galaxies (UDGs). They are as large as the Milky Way but have between 100 to 1,000 times fewer stars. This makes them appear fluffy and translucent — and difficult to observe.

Ironically, the lack of dark matter in these UDGs strengthens the case for dark matter, the researchers say. It proves that dark matter is a substance that is not coupled with normal matter, since they can be found separately.

In addition to van Dokkum and Danieli, team members include Roberto Abraham of the University of Toronto, Aaron Romanowsky of San Jose State University, and Charlie Conroy of Harvard.

Danieli is leading a wide area survey with the Dragonfly Telephoto Array — a telescope designed by van Dokkum — to look for more examples in a systematic way, then observe candidates again using the Keck telescopes.

“We hope to next find out how common these galaxies are and whether they exist in other areas of the universe,” Danieli said. “We want to find more evidence that will help us understand how the properties of these galaxies work with our current theories. Our hope is that this will take us one step further in understanding one of the biggest mysteries in our universe — the nature of dark matter.”