A new theory for ‘Oumuamua: It’s a comet that rocks 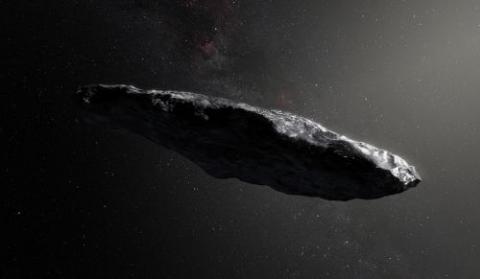 Astronomers at Yale and Caltech say that ‘Oumuamua, the much-discussed interstellar space rock, is best viewed as a comet with odd properties — and not an alien probe, as has been suggested.

‘Oumuamua is the first macroscopic object of clear interstellar origin to be seen within Earth’s solar system. It is about 900 feet long and had been traveling through space for millions of years prior to entering the solar system.

Researchers from the University of Hawaii first discovered ‘Oumuamua on Oct. 19, 2017, more than a month after it passed its closest point to the Sun. They named the object after the Hawaiian word for “scout.”

In the months since then, ‘Oumuamua’s behavior has baffled astronomers. For example, the object has showed a small but persistent acceleration that could not be explained simply by the Sun’s gravitational pull. As observations came in, there were a number of reclassifications and revisions to theories: It was classified as a comet, then as an asteroid, and finally as an interstellar object. Theories about its origin include everything from being a planetary fragment to a spaceship.

“It has left a number of mysteries in its wake,” said Yale graduate student Darryl Seligman, first author of a study about the research accepted for publication by the Astrophysical Journal Letters.

Seligman, Yale astronomy professor Gregory Laughlin, and Caltech professor Konstantin Batygin say the reason for ‘Oumuamua’s acceleration is fairly mundane: it’s the venting of gas that was heated up by the Sun.

Such “outgassing” happens regularly for comets, the researchers noted. As a comet approaches the Sun and heats up, its ice erupts in a jet. Comet “tails” are formed when dust particles get caught in the jet and reflect sunlight.

Yet ‘Oumuamua shows no evidence of a tail. Not only that, but ‘Oumuamua also doesn’t display the telltale spin that would be caused by a gas jet.

“In the model we’re proposing for ‘Oumuamua, the venting gas does not erupt from a single fixed point on the surface,” Laughlin said. “Instead, the jets migrate along the surface, following the warmth and tracking the direction to the Sun.”

This would mean that instead of spinning up, as in a typical comet, ‘Oumuamua rocks back and forth like a pendulum, according to Laughlin.

At this point, ‘Oumuamua has passed beyond Saturn’s orbit; it will take more than 10,000 years for it to exit the solar system entirely.

But the researchers say its discovery suggests that nearly every star in the galaxy may eject such objects during the planet formation process. If that is true, a new generation of telescopes such as the Large Synoptic Survey Telescope (LSST) in Chile may help scientists learn more about them.

“When LSST and other new telescopes come online, more of these interstellar interlopers will be spotted every year,” Seligman said.

The research was supported by the NASA Astrobiology Institute.