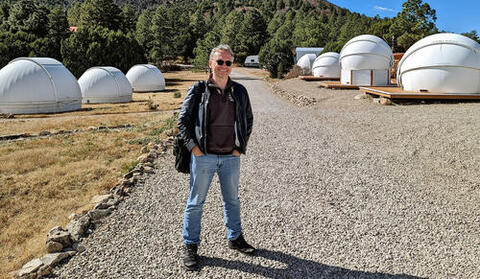 Yale astronomer Pieter van Dokkum has received the 2023 Jackson-Gwilt Medal from the UK-based Royal Astronomical Society (RAS) for his development of the Dragonfly Telephoto Array, an instrument that has achieved unprecedented success in the measurement of low-surface brightness structures in space.

A member of the Yale faculty since 2003, van Dokkum is the Sol Goldman Family Professor of Astronomy and professor of physics in Yale’s Faculty of Arts and Sciences and former chair of the Department of Astronomy.

The Jackson-Gwilt Medal is awarded for outstanding invention, improvement, or development of astronomical or geophysical instrumentation or techniques. Van Dokkum and his frequent collaborator, Roberto Abraham of the University of Toronto, received the honor at a meeting of the RAS in London on January 13.