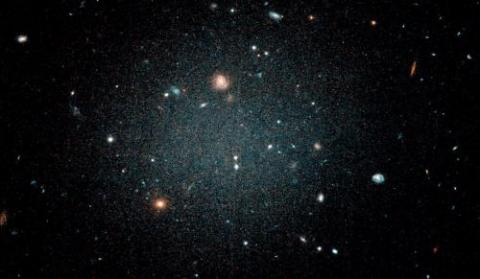 A Yale-led research team has discovered a galaxy that contains no dark matter — a finding that confirms the possibility of dark matter as a separate material elsewhere in the universe.

“We thought that every galaxy had dark matter and that dark matter is how a galaxy begins,” said Pieter van Dokkum, Yale’s Sol Goldman Family Professor of Astronomy and lead author of a new study in the journal Nature.

“This invisible, mysterious substance is the most dominant aspect of any galaxy,” van Dokkum said. “So finding a galaxy without it is unexpected. It challenges the standard ideas of how we think galaxies work, and it shows that dark matter is real. It has its own separate existence apart from other components of galaxies. This result also suggests that there may be more than one way to form a galaxy.”

Researchers from Yale, San Jose State University, the University of Toronto, Harvard, and the Max Planck Institute for Astronomy collaborated on the study.

Van Dokkum’s team located the galaxy — NGC 1052-DF2 — with the Dragonfly Telephoto Array, a telescope van Dokkum invented and built with co-author Roberto Abraham of the University of Toronto. The galaxy had been cataloged previously, but the researchers noticed it looked quite different in Dragonfly images.

This has been excerpted from the Yale University Press Release on March 28, 2018 by Jim Shelton.  The full release can be found at the link, below.