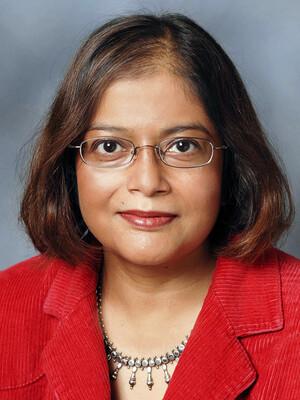 Sarbani Basu, whose discoveries have changed our understanding of the structure of the sun and the properties of stars, has been appointed the William K. Lanman, Jr. Professor of Astronomy, effective April 17.

She is a member of the Faculty of Arts and Sciences and current chair of the Department of Astronomy.

Basu joined the Yale faculty in 2000, after holding positions in England, Denmark, and at the Institute for Advance Studies in Princeton. A global authority in helioseismology, or the study of the structure and dynamics of the sun, her research uses the sun as a laboratory to study the physics within it.

She has advanced understanding of the physical properties of the interiors of stars and she has developed techniques for using seismic data to infer the properties of stars. In 2020, she was named a Fellow of the American Astronomy Society, the foremost honor for scholars in the field of Astronomy in this country. In addition, Basu is a Fellow of the American Association for the Advancement of Science, and was awarded the M.K. Vainu Bappu Gold Medal of the Astronomical Society of India. Basu has received numerous grants for her work, including an NSF CAREER Award.

Basu’s most distinguishing contribution to the study of the sun is in the observation of solar oscillations, or quakes. By studying this phenomenon, she can ascertain what is happening in the parts of the sun that are hidden from view. This method led Basu to discover that signatures of a new solar cycle can be observed deep inside the sun many years before we see the signs on the surface. For her work in understanding the internal structure and dynamics of the Sun, she was awarded the American Astronomical Society’s Solar Physics Division’s 2018 George Ellery Hale Prize, which honors outstanding contributions to the field of solar astronomy.

An author on more than 280 peer-reviewed publications, Basu is also co-author (with William J. Chaplin) of “Astroseismic Data Analyses: Foundations and Techniques” (Princeton University Press, 2017), the definitive guide to the subfield. She serves as an advisory board member for Solar Physics, the key journal in her field.

She is the vice chair of the Board of Directors of the Association of Universities for Research in Astronomy (AURA) and also represents Yale at AURA. She is a member of the Board of the TESS Astroseismic Science Consortium and the Steering Committee of the Kepler Astroseismic Consortium. As vice chair of AURA, Basu leads oversight of some of the most important research facilities in the country, including the Space Telescope Science Institute, the National Solar Observatory, the National Optical Astronomy Observatories, the Gemini Observatory, and the Vera Rubin Observatory (formerly the Large Synoptic Survey Telescope). In 2020, she served as chair of the panel on “Stars, the Sun and Stellar Populations” for the 2020 Astronomy Decadal Survey, which sets the agenda for astronomical research and thus shapes the future of astronomy. As a chair of this panel, Basu has helped identify the question that scientists in her field will pursue, and what types of telescopes, data archives and computers will be needed to answer the questions.

In addition to serving the scholarly community, Basu is a dedicated educator active in public-facing scientific outreach. She regularly speaks at events for young scientists in Connecticut and around the country and has led education programs for New Haven public school teachers and is leading a program as a part of the Yale-New Haven Teacher’s Institute’s National Initiative this year. She continues to serve on the Teacher’s Institute’s advisory committee. At Yale, she has mentored numerous graduate students, undergraduate students, and postdoctoral trainees, and serves as a freshman advisor in Timothy Dwight College.

She previously served as the director of graduate studies and direct of graduate admissions. She has twice served on the Yale College Steering Committee and has been a member of the Executive Committee of the Graduate School, and a number of other key university bodies.