Searching for Earth 2.0? Zoom in on a star 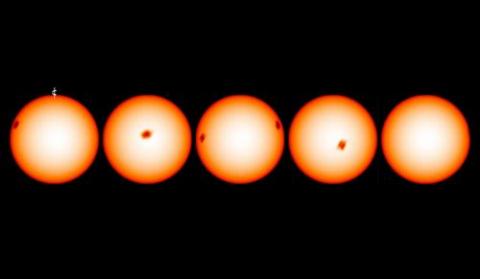 Astronomers searching for Earth-like planets in other solar systems have made a breakthrough by taking a closer look at the surface of stars.

A new technique developed by an international team of researchers — led by Yale astronomers Rachael Roettenbacher, Sam Cabot, and Debra Fischer — uses a combination of data from ground-based and orbiting telescopes to distinguish between light signals coming from stars and signals coming from planets orbiting those stars.

A study detailing the discovery has been accepted by The Astronomical Journal.

“Our techniques pull together three different types of contemporaneous observations to focus on understanding the star and what its surface looks like,” said Roettenbacher, a 51 Pegasi b postdoctoral fellow at Yale and lead author of the paper. “From one of the data sets, we create a map of the surface that allows us to reveal more detail in the radial velocity data as we search for signals from small planets.

“This procedure shows the value of obtaining multiple types of observation at once.”

For decades, astronomers have used a method called radial velocity as one way to look for exoplanets in other solar systems. Radial velocity refers to the motion of a star along an observer’s sightline.