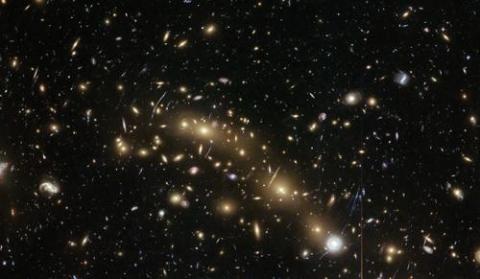 An international research team led by Yale University postdoctoral researcher Hakim Atek recently discovered more than 250 distant galaxies, including some of the faintest, smallest galaxies in the universe. The team relied upon new images from the Hubble Space Telescope, focusing on a trio of cosmic magnifying glasses.

Scientists have long wondered how the universe pierced the heavy veil of hydrogen gas that enshrouded it for millions of years after the Big Bang. This opaque layer of hydrogen was thick enough to block ultraviolet light, and the process of clearing away the hydrogen is known as re-ionization.

Yet the universe’s largest and brightest galaxies did not produce enough energy to account for re-ionization. That’s where the newly discovered, faint galaxies proved crucial to understanding this cosmic phenomenon. Atek’s team found that the accumulated light from these tiny galaxies — added to the other light — would be enough to cause re-ionization.

The research represents one of the largest samples of dwarf galaxies ever discovered from the early universe. With the new information, the researchers said, they estimate the universe became fully transparent about 700 million years after the Big Bang.

Publication of the research in the Astrophysical Journal is pending. Priyamvada Natarajan, a Yale professor of astronomy and physics, is a co-author of the paper. Other co-authors represent the Observatoire de Lyon, Aix Marseille Université, and CNRS, in France; the Université de Genéve, in Switzerland; the University of Hawaii; and the University of Arizona.

- adapted from a Yale University press release by Jim Shelton