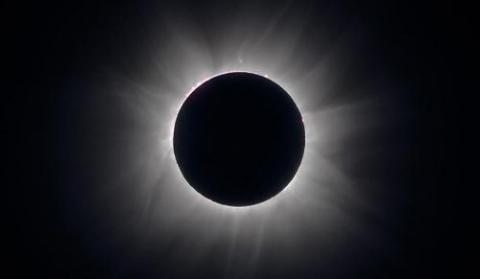 Over 1500 people gathered in Farnham Gardens in front of the Leitner Family Observatory and Planetarium on Monday, August 21, 2017 to watch the somewhat rare event of a partial solar eclipse in New Haven.  The eclipse peaked at 68% coverage at about 2:45pm.

Yale astronomers were on hand with solar telescopes, eclipse glasses, sunspotters, colanders, and pinhole projectors to show the eclipse both directly and indirectly through projecting shadows on a piece of paper.  Live feeds of totality from the exploratorium, NASA, and Slooh were shown on two screens inside the building, which also had three activity centers and hanging informational cards about the sun from NASA.

Several local media outlets covered the event, before, during and afterwards, see below for links: