A welcoming place for women in Yale astrophysics 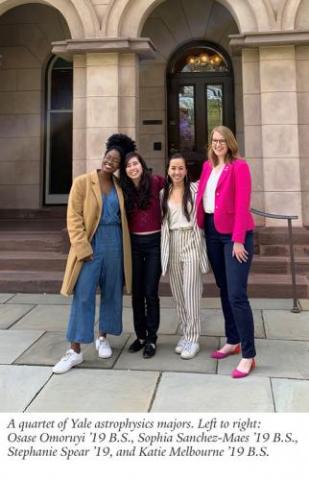 The same day she took her last final at Yale, Katie Melbourne ’19 B.S. caught a flight home to Iowa to present at the annual convention of the North Central Region of the Astronomical League being hosted by her local astronomy club. She’s been a member of that club since she was in high school, attending monthly talks at the local planetarium along with the other members — mostly male, largely retirees, with the occasional son or grandson in tow.

Melbourne spoke about her specialty: exoplanets, Earth-sized, potentially habitable planets, and M dwarf stars, the smallest stars, which exoplanets orbit. “I study the stellar activity of M dwarf stars,” Melbourne says. “How the radiation of the stars can impact our observations of exoplanet habitability indicators.”

While at the convention, Melbourne met and spoke with a girl in her first year of high school who also happened to be interested in exoplanets. “Hearing her excitement over finding someone else like her in the field was humbling,” Melbourne says. “I didn’t have role models like that until I got to Yale.”

When Melbourne took her first Advance Placement physics class as a junior in high school, having prepared herself through an online course, she was one of just three women in a class of 25 and nearly dropped out. “The teacher was very supportive, but I was struggling, and felt really alone,” she says. “Shifting to a cohort of women has been incredible. It’s so important for women to have role models pursuing different careers — to see a tangible path forward.”

A recent study in PLOS found that, based on authorship of scientific papers, less than 20% of authors in astrophysics in 2016 were women, and, based on trends, the field would not be expected to reach gender parity for more than 100 years.

Sarbani Basu, chair of Yale’s astronomy department, says: “I am delighted by our outgoing class — four strong young women from diverse backgrounds who have done extremely well.” Basu notes that students studying astrophysics at Yale “become an integral part of the department” and are encouraged to interact with grad students in common spaces and to “start research projects as soon as they can.” 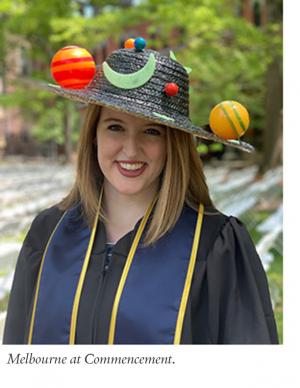 Melbourne has made increasing access to science, technology, engineering, and math (STEM) fields for girls and women a focus of her work. A research paper she wrote called “Keeping Women in Science” appears on her website, and details the importance of emotional intelligence training to create a sense of belonging and improve retention rates of women in STEM. She’s also co-president of the Yale Women in Physics group and co-hosts a podcast called Get This Girl a Job in which she and a friend from the University of Chicago interview women who have recently graduated and found work.

“There’s a lot of information about how to find internships, but not how to find first jobs,” Melbourne says. “We’re trying to demystify the process.”

Officially, Melbourne will graduate in December, but she walked for last weekend’s Commencement ceremony, wearing a straw hat adorned with planets.

“What is special about Katie,” says Basu, who acted as Melbourne’s thesis advisor, “is that she does not wait for people to give her opportunities to follow her passion, she seeks them out. That drive will stand her well in the future.”