What hurricanes and space storms have in common 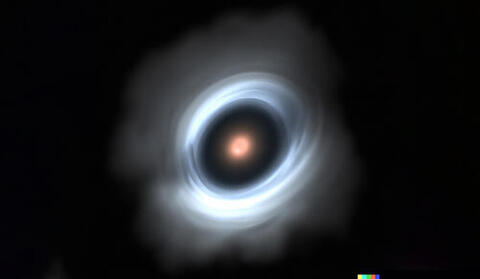 Those massive, swirling radar images shown on TV during hurricane season may have an unexpected analog in the deepest reaches of the cosmos — extrasolar storms of dust and gas from which nascent planets begin to form.

Both storms — terrestrial and extrasolar — feature churning whirlpools of vapor. Both use latent heat to sustain their prodigious circulating motion in the face of energy-draining dissipation.

But while the Atlantic hurricane season lasts four months a year and is restricted to a portion of planet Earth, space storms may play out over millions of years and occur in protoplanetary disks throughout the universe.

Konstantin Gerbig, a graduate student in the Department of Astronomy, and Gregory Laughlin, a professor of astronomy in Yale’s Faculty of Arts and Sciences, have documented a mechanism that can power these space storms and noted the way they mirror terrestrial hurricanes.

As forecasters continue to monitor this year’s Atlantic hurricane season, Yale News spoke with Gerbig and Laughlin about their findings — and what insight they might provide about hurricane-like storms near and far.

When did the connection between terrestrial and extrasolar storms first occur to you?

Gregory Laughlin: Prior to moving to the East Coast from California, tropical storms and hurricanes were something of a far-away concern for me. But there’s a certain immediacy to seeing a “Tropical Storm Warning” on one’s cell phone, which prompted me to realize that I didn’t really understand the physics of hurricanes. That got me reading the literature, especially the articles by Kerry Emanuel at MIT. I came to appreciate the importance of the latent heat of water in driving the process and realized that very analogous conditions might exist in the planet-forming disks of gas and dust orbiting young stars.

What do the mechanisms that drive these storms have in common?

Konstantin Gerbig: The extraterrestrial storms we envisioned are reliant on a mechanism that is very similar to the one that drives hurricanes on Earth.

Hurricanes are reliant on the warm ocean water in the tropics. The strong winds roil the water surface and, in the process, saturate the air in the hurricane with water, leading to cloud formation and heavy rain. The release of latent heat in the eye of the hurricane drives vigorous upwards convection which in turn leads to faster wind speeds. This ‘engine’ is shut off when the hurricane is deprived of its water supply by hitting land.

While protoplanetary disks do not have an ocean or liquid water in general, they are rich in dust grains that are encased in a water-ice coating. Much like hurricanes on Earth, we proposed that winds in the protoplanetary disks can intensify significantly if they can access the energy hidden in the solid phase of water ice. As such, the energy source for extrasolar hurricanes is the same as for hurricanes on Earth. Another similarity is that both mechanisms are dependent on the mixing efficiency between the gaseous winds and the water, and as a result the storm in the disk would also cease to exist if the dust grains are removed.

Was it difficult to show that whirlpools in space can be sustained long enough in a protoplanetary disk to create such a storm?

Gerbig: In order to show that these extraterrestrial storms are indeed feasible, we focused on two questions: Do protoplanetary disks offer favorable conditions for the proposed mechanism to operate in the first place? Second, is the engine strong enough to compensate for the loss of energy it is subjected to by nature of being embedded in a viscous protoplanetary disk?

To answer these questions, we would ideally look at real observations of protoplanetary disks. However, while observations of such disks have gotten better and better in recent years, the resolution of our telescopes remains far below what would be required to see storms of the sizes that we predict for proposed hurricanes. Because of this, we performed computer simulations to test the feasibility of our storms.

The plan was to figure out what initial conditions are required to produce a storm that can fight against a given viscosity, which is a measure for the disk’s internal friction. This way, we were able to constrain the ideal location for such storms to operate to just outside the so-called water-snow line — a key location in protoplanetary disks marking the boundary between water vapor and water ice. One challenge in interpreting our simulations is the disk viscosity, which is considered an unknown and consequently hotly debated property of protoplanetary disks. We found that our mechanism works best for protoplanetary disks that are of relatively low viscosity.

Is there a visual similarity between hurricanes and storms in space?

Gerbig: We envision the hurricane analogue in protoplanetary disks to appear quite similar in flow structure to terrestrial hurricanes. Both are rotating storms centered around an ‘eye’ region in which convection operates. We also predict the extraterrestrial storm to be enhanced in water content, much like how hurricanes have easily recognizable cloud patterns.

There are also some interesting differences. For example, we expect the extraterrestrial hurricane to be an anticyclone (rotating in the opposite direction of a terrestrial hurricane). This is because the protoplanetary disk possesses an inherent rotation that differs from the rotation of a planet, such that only anticyclonic storms can be in geostrophic balance. Also, since the gravity in the protoplanetary disk pulls towards the disk midplane, there are two ‘upward’ directions in the disks, which leads to two storms, one above and the other below the midplane.

How can this information be used to further research?

Gerbig: Our proposed mechanism would be important for understanding planet formation as the extra-terrestrial hurricane would capture dust particles much like how the terrestrial hurricane can trap a flock of birds. If the vortex is long-lived enough, and continuously supplied with new dust and pebbles, it can serve as a site for dust coagulation and the formation of planetary embryos. This is a very exciting result as it would be another pointer to the water-snow line as a location of crucial importance in protoplanetary disks.