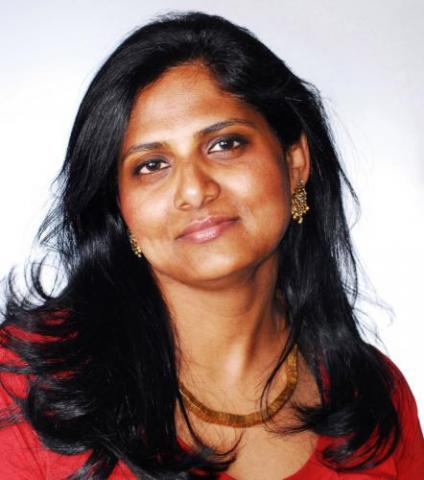 When Einstein published his general theory of relativity in 1915, he didn’t have any evidence his idea was true. The math worked out, yes, and he had a few examples he could point to that seemed to agree with his theory, like the hard-to-explain orbit of Mercury, for example.

But it wasn’t until the total solar eclipse of May 29, 1919 that Sir Arthur Eddington and his two teams of scientists were able to confirm that, during the eclipse, a few stars seemed off-kilter, displaced from their usual spot in the sky. It was the first evidence that the mass of the sun had caused a bulge in spacetime, sending the starlight on a very slight detour. Einstein was on the front page of newspapers worldwide the next morning.

And that’s how it works in science, right? You got an idea? Prove it. Or at least wait until someone else can. As a grad student in astrophysics at Cambridge University, Priya Natarajan devised a theory that might explain a mysterious relationship between black holes and nearby stars, proposing that as black holes gobble up nearby material, they “burp,” and the resulting winds affect the formation of nearby stars. Now, 20 years later, the experimental evidence has finally come in: Her theory seems correct.

This hour, Ira talks with Priya about her theory. And Nergis Mavalvala of MIT joins to talk about why “squeezing light” may be the key to detecting more distant black hole collisions with the gravitational wave detector LIGO.

Visit Science Friday to listen to the complete podcast.