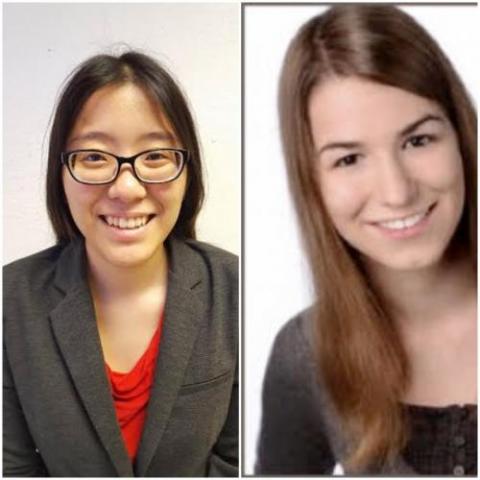 The Yale Department of Astronomy is pleased to announce that the Dorrit Hoffleit Undergraduate Research Scholarship has been awarded to Saki Kamon and Nora Martin. This year, the Hoffleit Scholarship received 67 applications from 13 countries and 21 states. The Hoffleit Scholarship includes a $450 per week salary, a housing stipend, a meal stipend, and up to $1000 for travel. Hoffleit Scholars work with a Yale Astronomy faculty member on a project. This will be the third class of Hoffleit Scholars since the program’s founding in 2014. Professor Louise Edwards, Chair of the Selection Committee, says, “The past two summers have been a huge success with visiting students from various backgrounds performing original research and interacting with our Yale undergraduates, postdocs and faculty. I’m very excited to meet the new arrivals this June.”

Saki Kamon | The University of Texas at Austin

Saki Kamon is a rising senior at the University of Texas at Austin. This summer, she will work with Professor Debra Fischer on an instrumentation project. In the past, Saki has worked on projects such as Exploring the Universe with White Dwarf Stars with the UT Freshman Research Initiative and Near Infrared Imaging Data Reduction on Gamma Ray Burst Host Galaxy Fields while doing a physics REU at the University of Chicago. She has served as the co-President of the UT Undergraduate Women in Physics, volunteered with the UT Astronomy Students Association, and been active in Sigma Pi Sigma, the physics honor society. As a 6th grader, a graduate student at the University of California, Berkeley Department of Astronomy responded to Saki’s class project letter, an experience which was meaningful to Saki and sparked her love of astronomy. She admires Neil deGrasse Tyson for his ability to convey complex scientific information to the larger public. Saki hopes to explore New Haven’s museums and historical sites this summer, and is relieved that New Haven is not as hot at Texas in the summer. She is excited to work with Yale’s renowned exoplanet group.

Nora Martin has finished her third year at St. Anne’s College of the University of Oxford. This summer, she will work with Professor Jeff Kenney on galaxy evolution. Nora has done research in experimental atomic physics and given a presentation about cosmic expansion to the German National Academic Foundation: Summer Academy on Dark Matter and Dark Energy. At Oxford, she has served as the website administrator for the Oxford University Physics Society and will be one of its co-presidents in the upcoming academic year. She is passionate about the environment and teaches lessons about environmental issues at a local school. Additionally, Nora is active in student government in St. Anne’s College. Nora admires astronomers Caroline Herschel and Mary Somerville, and looks forward to learning more about Dorrit Hoffleit. She is excited to experience student life in an American university, comb through Yale’s rare books collections, and go on a day trip to New York City. This summer she hopes to become more adept at working with astronomical data as well as learning more about writing and using numerical code to analyze data and draw conclusions.