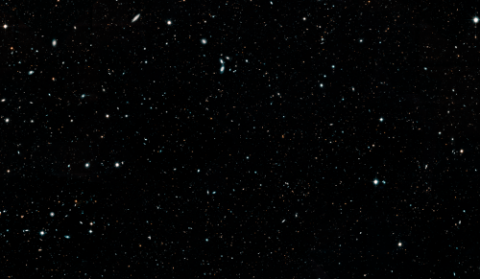 Astronomers have assembled a mosaic of nearly 7,500 images of one part of the sky, creating the largest and most comprehensive history book of the universe.

The Hubble Legacy Field (HLF) mosaic image combines observations from 16 years’ worth of Hubble Space Telescope deep-field surveys, including the eXtreme Deep Field (XDF) survey, which offers the most far-reaching view of the universe. The image contains 265,000 galaxies that stretch back through 13.3 billion years of the universe’s history, to just 500 million years after the big bang.

As astronomers look farther into space, in terms of distance, it allows them to look farther back in time. The faintest and farthest galaxies in the new image are just one ten-billionth the brightness of what the human eye can see without a telescope.

“Hubble has looked at this area of the sky many times over many years, and now we have combined all these photographs into a single, very high-quality, wide-angle image. It is like having a history book of the universe in one image,” said Pieter van Dokkum, the Sol Goldman Family Professor of Astronomy at Yale and co-investigator on the team that assembled the image.

The new portrait shows how galaxies change over time, building themselves up to become the giant galaxies seen in the nearby universe. Studying galaxies allows astronomers to trace the expansion of the universe, offers clues to the underlying physics of the cosmos, indicates when the chemical elements originated, and reveals the conditions that led to the appearance of life on Earth.

The HLF image contains 100 times as many galaxies as the previous deep field surveys — in part because it takes in a wider view. It covers an area of the sky that, viewed from Earth, is nearly the width of the Earth’s moon (or half the width of your forefinger held at arm’s length). By comparison, the XDF survey, which focuses on the same region of the sky, covers an area of space less than one-tenth of the moon’s diameter. 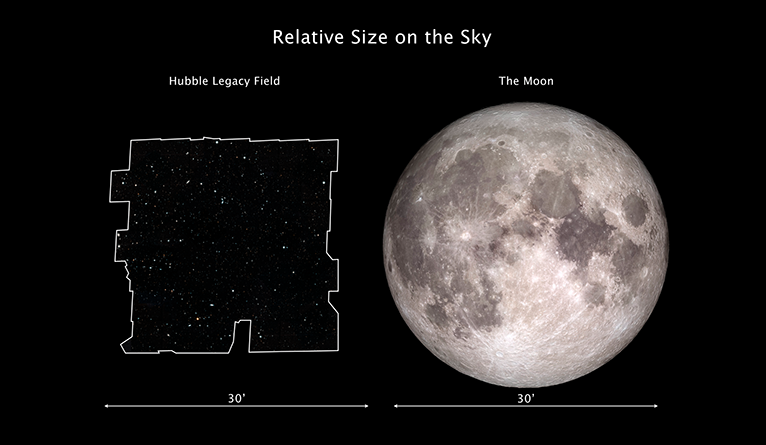 “Now that we have gone wider than in previous surveys, we are harvesting many more distant galaxies in the largest such dataset ever produced,” said Garth Illingworth of the University of California-Santa Cruz, leader of the team that assembled the image. “This one image contains the full history of the growth of galaxies in the universe, from their times as ‘infants’ to when they grew into fully-fledged ‘adults.’ No image will surpass this one until future space telescopes are launched.”

The image comprises the collective work of 31 Hubble programs by different teams of astronomers. The full mosaic and its individual images are available through the Mikulski Archive for Space Telescopes (MAST), an online database of astronomical data from Hubble and other NASA missions. MAST is a project of the Space Telescope Science Institute in Baltimore.

Van Dokkum said astronomers hope to broaden the multi-wavelength range of the HLF images to include longer-wavelength infrared data and high-energy X-ray observations from two other members of the NASA Great Observatories program: the Spitzer Space Telescope and Chandra X-ray Observatory.

Meanwhile, the HLF team is working on a second set of images, that will include more than 5,200 Hubble images from another area of the sky. It sets the stage for NASA’s planned Wide Field Infrared Survey Telescope, which will explore an even wider area of space than HLF.