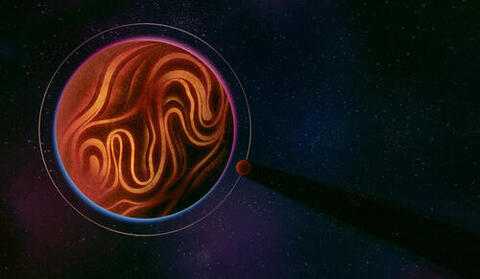 Fri, 12/09/2022
A Yale-designed and developed instrument has given astronomers a better idea of how 55 Cnc e — also known as the “hell planet” — got where it is today.

A piece of Yale-developed technology has helped astronomers follow the fiery trail of the so-called “hell planet,” an exoplanet located 40 light years from Earth and nicknamed for its extremely close orbit to its sun.

The EXtreme PREcision Spectrometer (EXPRES), developed at Yale by astronomer Debra Fischer and installed at the Lowell Observatory’s Lowell Discovery Telescope in Arizona, has captured ultra-precise measurements of the starlight from the distant planet’s sun. Astronomers have now analyzed those measurements to determine the orbit of planet 55 Cnc e, nicknamed the “hell planet.”

The new findings appear Dec. 8 in the journal Nature Astronomy. 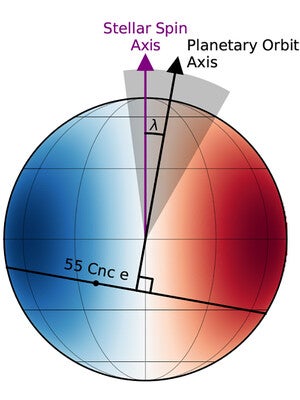 A diagram shows the orbit of exoplanet 55 Cnc e (represented by a black dot) around its star, 55 Cnc (the large circle). The planet’s orbit, shown as a slanted horizontal line, broadly aligns with the star’s equator. As the planet moves between the star and Earth, the host star’s light dips. The resulting change in the star’s observed color depends on which half of the star the planet is crossing. Due to the Doppler effect, the hemisphere rotating toward Earth is slightly more blue, the hemisphere spinning away from Earth is more red, and the middle is unchanged. (L.Zhao et al./Nature Astronomy 2022)

“While the Earth completes one orbit around our sun in 365 days, the planet studied here orbits once every 17.5 hours, hugging its host star, 55 Cnc,” said Fischer, the Eugene Higgins Professor of Astronomy in Yale’s Faculty of Arts and Sciences and senior author of the new study.

“Astronomers expect that this planet formed much farther away and then spiraled into its current orbit,” Fischer said. “That journey could have kicked the planet out of the equatorial plane of the star, but this result shows the planet held on tight.”

Fischer is also director of the National Science Foundation’s Division of Astronomical Sciences and a leading figure in the study of exoplanets — planets outside Earth’s solar system.

Lily Zhao, a research fellow at the Flatiron Institute’s Center for Computational Astrophysics in New York and a former Yale graduate student who worked with Fischer on EXPRES, is lead author of the study.

“This result uses data from EXPRES to determine the spin-orbit alignment of 55 Cnc e, which is an ultra-short period super-Earth exoplanet in a five-planet system,” Zhao said. “Our measurement places interesting constraints on the dynamical history of this system and how planets migrate so close-in to their host stars. This is the smallest such measurement to date.”

The primary mission of EXPRES is finding Earth-like planets based on the slight gravitational influence they have on their stars.

In the new study, the researchers learned that 55 Cnc e orbits 55 Cnc along the star’s equator — unlike the other four planets in the system, which are on much different orbital paths.

This implies that the planet may have formed in a relatively cooler orbit farther out and slowly fell toward its sun over time. As the planet moved closer, the stronger gravitational pull from the sun’s thicker, equatorial middle altered the planet’s orbit.

The findings may help researchers better understand how planets form and move over time, Zhao and Fischer said. Such information is critical to finding out how common it is for an Earth-like environment to exist elsewhere in the universe.

“Our precision with EXPRES today is more than 1,000 times better than what we had 25 years ago when I started working as a planet hunter,” Fischer said. “Improving measurement precision was the primary goal of my career because it allows us to detect smaller planets as we search for Earth analogs.”