Yale has a front-row seat for a new, international space mission: ASTRO-H 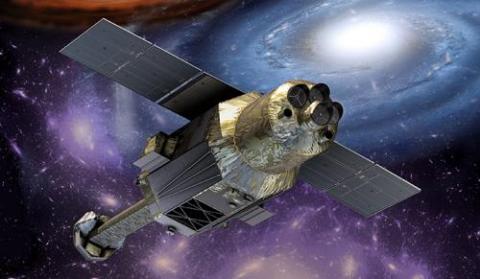 A new science satellite, the ASTRO-H X-ray Observatory, will blast into the cosmos this month with a full payload of Yale University expertise.

The project, led by the Japan Aerospace Exploration Agency (JAXA), aims to collect a wealth of new data on everything from the formation of galaxy clusters to the warping of space and time around black holes. ASTRO-H will launch Feb. 12 from the Tanegashima Space Center, with participation from NASA, the European Space Agency (ESA), and research institutions around the world, including Yale.

“This is the next, big X-ray observatory,” said Andrew Szymkowiak, a Yale senior research scientist in astronomy and physics who is part of the ASTRO-H mission. “We’re going to clean up on new information about galaxy clusters and supernova remnants.”

Meg Urry, Yale’s Israel Munson Professor of Physics and Astronomy, and Paolo Coppi, professor of astronomy and physics, are members of the ASTRO-H scientific working group. They will be among the first scientists to get a look at the data collected by ASTRO-H.

“This will be a powerful observatory,” Urry said. “We’re using novel technology to learn about objects that are very far away, in more detail than ever before.”

In particular, Urry noted, the gear aboard ASTRO-H boasts better energy resolution by a factor of 30 and a sensitivity level that is orders of magnitude better than previous technology. Data from ASTRO-H will aid Urry’s ongoing research into the formation and evolution of black holes and their host galaxies, and Coppi’s work exploring deep space objects that are surrounded by dense gasses.

For Szymkowiak, the mission represents the culmination of a long-term personal commitment, as well. In 1983, while working for NASA’s Goddard Space Flight Center, he was part of a team that developed a new way to build an X-ray spectrometer with the potential to collect information on a wider expanse of diffuse objects in deep space. The idea was to test the instrument on a rocket being readied by the Japanese space program.

Szymkowiak’s instrument, the SXS, now will be the central piece of technology aboard ASTRO-H. Here’s how it works: refrigeration units will cool specialized detector elements to near absolute zero. When X-rays emitted by objects in deep space are absorbed by the detector elements, they will increase in temperature. Scientists will use that temperature rise to measure the energy of the X-ray. The SXS is expected to generate the most accurate X-ray measurements of any instrument to date.

“Our team has been working on this experiment for 30 years,” Szymkowiak said. “While we’ve really enjoyed working with our Japanese colleagues, during the many weeks of instrument integration, testing, and launch rehearsals, it is going to be so rewarding to finally get to reap the scientific rewards.”

This article has been adapted from a Yale University press release by Jim Shelton.