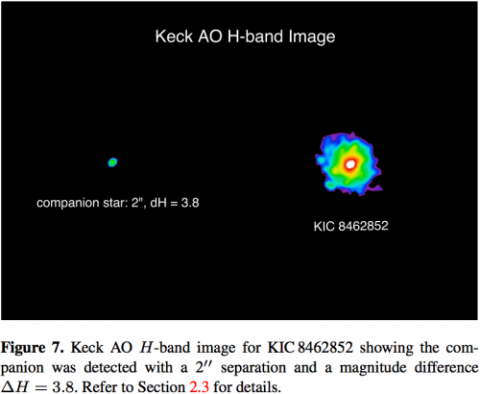 Yale Postdoctoral Associate Tabetha Boyajian has found an explanation for a very unusual star found by Planet Hunters, a team of citizen-scientists founded in 2010 to analyze data from the Kepler space telescope.

According to an article by Erik Ofgang in Connecticut magazine, “A planet will block about 1 percent of its host star’s light while whatever was orbiting [the star] KIC 8462852 was blocking about 20 percent of the star’s light.”

Ofgang also wrote:  “Ultimately Boyajian and her citizen science collaborators decided the most likely explanation for the observations of the star were that a family of comets were pulled off course when another star veered close to KIC 8462852, and as a result the comets were broken up and caught in KIC 8462852’s orbit.”

A fellow astronomer from Penn State University, Jason Wright, cited Boyajian’s paper in a paper that he wrote about the search for extraterrestrial civilizations as an example of possible evidence of alien megastructures.  This claim was investigated in an article in the Atlantic, and then was picked up in a viral media storm of articles about the possibility. Even Saturday Night Live featured a spoof of the claim in its October 17th “Weekend Update”.

As Ofgang writes: “Though Boyajian understands why talk of alien substructures was put in so many headlines—’that captures the reader and I get that’ she says—she herself shies away from speculating about an alien connection. ‘We haven’t detected anything, we haven’t even looked for anything yet,’ she says.”

Wright also has expressed that the oddity of the star is not likely due to alien megastructure – that is the farthest possible hypothesis of his.  He does believe, however, that it may be due to the star being very young.

Boyajian will continue to study the star KIC 8462852 to gain more data to test her hypothesis.