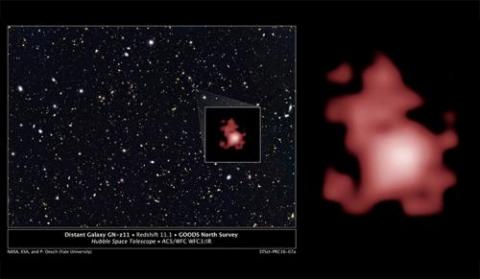 Yale astronomers have found the farthest known galaxy in the universe — again.

Less than a year after aiding in the measurement of a galaxy 13.1 billion light years into the past, Yale Postdoctoral Associate Pascal Oesch has led an international team that includes astronomers from Yale, the Space Telescope Science Institute and the University of California-Santa Cruz to measure and spectroscopically confirm the distance of a galaxy whose light took 13.4 billion light-years to reach Earth. The findings appear in an upcoming edition of the Astrophysical Journal.

Described by its discoverers as “surprisingly bright,” the galaxy, named GN-z11, is located in the direction of the constellation of Ursa Major.

“We’ve taken a major step back in time, beyond what we’d ever expected to be able to do with Hubble. We see the galaxy at a time when the universe was only 3% of its current age, very close to the end of the so-called Dark Ages of the universe,” said Oesch.

“The discovery of this unexpectedly bright galaxy at such a great distance challenges some of our current theoretical models for the build-up of galaxies,” said said Pieter van Dokkum, the Sol Goldman Family Professor of Astronomy and chair of Yale’s Department of Astronomy, who is a co-author of the findings. “Larger area datasets are now needed to measure how common such bright galaxies really are so early in the history of the universe.”

The measurement builds on and uses the same techniques first developed by Yale astronomers as part of the successful 3D-HST survey, led by van Dokkum, who said the new distance record is likely to stand until the launch of NASA’s James Webb Space Telescope in 2018.

This article has been adapted from a Yale University Press Release by Jim Shelton.