Yale’s EXPRES instrument ready to find the next Earth analog 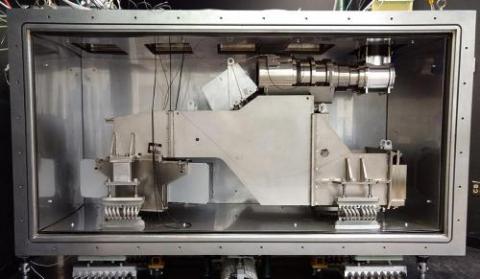 A new, ground-based spectrometer designed and built at Yale represents the most powerful step yet in the effort to identify Earth-sized planets in neighboring solar systems.

The new instrument, the Extreme Precision Spectrometer (EXPRES), is now operational and collecting data at the Lowell Observatory Discovery Channel Telescope in Arizona. EXPRES will improve measurement precision by a factor of 10, enabling the detection of small, rocky planets around nearby stars.

“Up until now, the only planets we could detect with ground-based spectrographs were the bigger ones, the Saturns and Jupiters,” said Yale professor Debra Fischer, whose team designed EXPRES. “We know the smaller planets are out there, but they’ve slipped through our nets.”

Better data is particularly important, Fischer noted, because although astronomers have identified thousands of new planets in the past few years, none are analogs of Earth. Understanding which planets are similar in size to Earth and orbiting at distances from their host stars where water is likely to pool into lakes or oceans will be essential in the search for life elsewhere in the cosmos, she added.

This has been excerpted from the Yale University Press Release on March 13, 2018 by Jim Shelton.  The full release can be found at the link, below.