Yale’s EXPRES looks to the skies of a scorching, distant planet 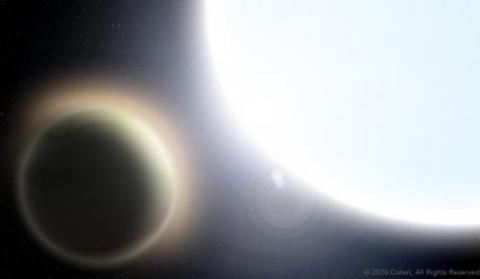 Yale technology is giving astronomers a closer look at the atmosphere of a distant planet where it’s so hot the air contains vaporized metals.

The planet, MASCARA-2 b, is 140 parsecs from Earth — or roughly 2.68 quadrillion miles. It’s a gas giant, like Jupiter. However, its orbit is 100 times closer to its star than Jupiter’s orbit is to our Sun.

The atmosphere of MASCARA-2 b reaches temperatures of more than 3,140 degrees Fahrenheit, putting it on the extreme end of a class of planets known as hot Jupiters. Astronomers are keenly interested in hot Jupiters because their existence had been unknown until 25 years ago and they may offer new information about the formation of planetary systems.

“Hot Jupiters provide the best laboratories for developing analysis techniques that will one day be used to search for biosignatures on potentially habitable worlds,” said Yale astronomer Debra Fischer, the Eugene Higgins Professor of Astronomy and co-author of a new study that has been accepted by the journal Astronomy and Astrophysics.

Fischer is the guiding force behind the instrument that made the discovery possible: the Extreme PREcision Spectrometer (EXPRES), which was built at Yale and installed on the 4.3-meter Lowell Discovery Telescope near Flagstaff, Ariz.

Read more of Jim Shelton’s article from Yale News below