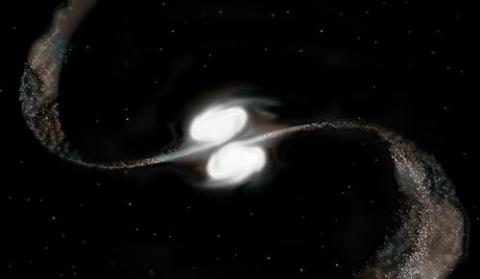 C. Megan Urry’s research team has solved the mystery of the origin of quasars.  Using infrared imaging from the Hubble Space Telescope, they confirmed that quasars are born when galaxies crash into each other and fuel supermassive, central black holes.

The lead author of the paper in the Astrophysical Journal is Eilat Glikman of Middlebury College in Vermont, lead author of the study and a former Yale postdoctoral researcher.
Other authors of the study were Brooke Simmons of Oxford University, a former graduate student at Yale; Madeline Mailly of Middlebury College; Kevin Schawinski of ETH Zurich, a former Einstein Fellow at Yale; and M. Lacy of the National Radio Astronomy Observatory in Charlottesville, Va.

“The Hubble observations are telling us that the peak of quasar activity in the early universe is driven by galaxies colliding and then merging together,” said Glikman  “We are seeing the quasars in their teenage years, when they are growing quickly and all messed up.”