Growing pains in a cluster of protostars 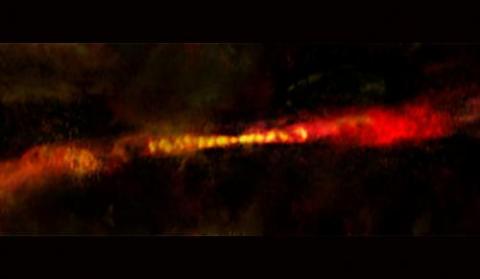 A Yale-led study has found a cluster of young stars that develop in distinct, episodic spurts.

It is the first time astronomers have seen such a growth pattern within a star cluster — a chaotic, turbulent environment that is common for star formation. Previous observations have focused on stars forming in more isolated regions of space.

The first author of the paper, published this week in the journal Nature, is Adele Plunkett, a recent Yale graduate student now working with the European Southern Observatory (ESO) in Santiago, Chile. Plunkett and her colleagues used data from the Atacama Large Millimeter/sub-millimeter Array (ALMA) in Chile to conduct the research.

“This result shows that when young stars grow they do so episodically, in little growth spurts, rather than steadily,” said co-author Pieter van Dokkum, the Sol Goldman Professor of Astronomy and chair of Yale’s Department of Astronomy. “They’ve learned to chew their food before they swallow.”

The other co-authors of the paper are Héctor Arce, an astronomy professor at Yale, Diego Mardones of the Universidad de Chile, Michael Dunham of the Harvard-Smithsonian Center for Astrophysics, Manuel Fernández-López of Instituto Argentino de Radioastronomía, and José Gallardo and Stuartt Corder of the Joint ALMA Observatory.

This article was adapted from a Yale press release by Jim Shelton.