A New Frontier for Exoplanet Hunting 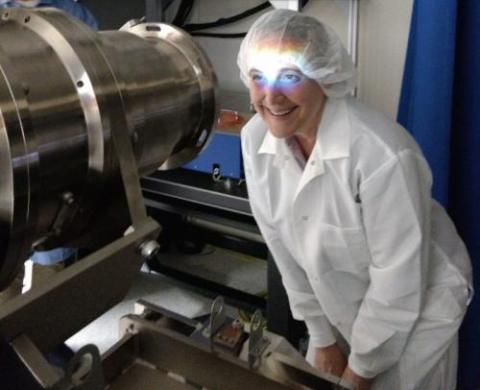 The first exoplanets were all found using the radial velocity method of measuring the “wobble” of a star — movement caused by the gravitational pull of an orbiting planet.

Radial velocity has been great for detecting large exoplanets relatively close to our solar system, for assessing their mass and for finding out how long it takes for the planet to orbit its host star.

But so far the technique has not been able to identify and confirm many Earth-sized planets, a primary goal of much planet hunting.  The wobble caused by the presence of a planet that size has been too faint to be detected by current radial velocity instruments and techniques.

However, a new generation of instruments is coming on line with the goal of bringing the radial velocity technique into the small planet search.  To do that, the new instruments, together with their telescopes. must be able to detect a sun wobble of 10 to 20 centimeters per second.  That’s quite an improvement on the current detection limit of about one meter per second.

At least three of these ultra high precision spectrographs (or sometimes called spectrometers) are now being developed or deployed.  The European Southern Observatory’s ESPRESSO instrument has begun work in Chile; Pennsylvania State University’s NEID spectrograph (with NASA funding) is in development for installation at the Kitt Peak National Observatory in Arizona; and the just-deployed EXPRES spectrograph put together by a team led by Yale University astronomers (with National Science Foundation funding) is in place at the Lowell Observatory outside of Flagstaff, Arizona.

The principal investigator of EXPRES, Debra Fischer, attended the recent University of Cambridge Exoplanets2 conference with some of her team, and there I had the opportunity to talk with them. We discussed the decade-long history of the instrument, how and why Fischer thinks it can break that 1-meter-per-second barrier, and what it took to get it into attached and working.