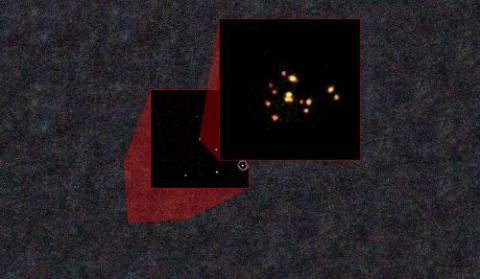 Tim Miller, a doctoral candidate in astronomy, is first author of a new study in the journal Nature about the initial stirrings of a 14-galaxy collision in the distant universe.

The galactic crash will become a massive galaxy cluster. Scientists know this because the collision is located 12.4 billion light-years from Earth. Its light began traveling to where we could see it when the universe was only 1.4 billion years old, or about a tenth of the universe’s current age.

Galaxy clusters are the largest objects in the known universe, with as many as 1,000 galaxies. The new study focuses on a protocluster known as SPT2349-56. Using the Atacama Large Millimeter/submillimeter Array (ALMA), an international research team was able to study SPT2349-56 in detail.

“How this assembly of galaxies got so big so fast is a bit of a mystery. It wasn’t built up gradually over billions of years, as astronomers might expect,” said Miller, who worked on the study while at Dalhousie University in Canada. “This discovery provides an incredible opportunity to study how galaxy clusters and their massive galaxies came together in these extreme environments.”

Written by Jim Shelton. The original post can be found here: